How can we end the ‘princessification’ of girls and the toxification of boys?

Unlimited Potential, a new landmark report from the Commission on Gender Stereotypes in Early Childhood, warns that children’s potential is being “significantly” limited because of harmful stereotypes. 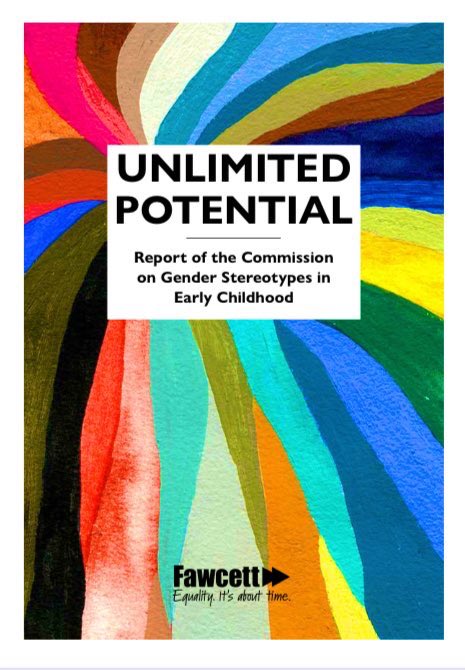 The Commission was established by leading gender equality campaigning charity, the Fawcett Society, and calls for changes in education, parenting and the commercial sector.

Take the tired old but dangerous idiom “boys will be boys”. This has been knocking around the bottom of our language barrel for donkey’s years and basically ‘attempts to explain away aggressive behaviours that a small number of children exhibit by linking it with “natural” or “biological” impulses’ (Meyer, 2014).

But it’s expressions like these that still get used in schools and that’s not good because this allows stereotypes to keep on flourishing. We might think we have come a long way but really we haven’t – gender stereotypes continue to be widespread and deeply embedded.

Gender stereotypes are oversimplified generalisations that dictate what is acceptable or expected for women and girls, and men and boys.

The report found that stereotypes worsen girl’s self-esteem and lead to poorer reading skills among boys.

The 18-month-long study found three-quarters of parents said they treat young people differently based on their gender from an early age. This isn’t surprising. What’s more surprising is that schools are allowing stereotypes to roam around as if they own the place.

Stereotypes are dangerous because they cause real mental and physical harm. If we don’t challenge gender-stereotyped behaviour in early childhood then we are hardly likely to see a reduction of violence against women and girls. Gender stereotypes can also significantly contribute to the abuse and harassment of LGBT young people and adults.

The report really spells things out to us:

By challenging gender stereotypes, we can close the gender gap in STEM; challenge economic inequality; improve boys’ reading scores; tackle the crisis of happiness among children; limit the harms caused by negative body image; tackle the single biggest killer of men under 45 in the UK; reduce the harms caused by violence against women and girls which costs society £66bn each year,13create a better future for LGBT people, and address the combined harm of racism and intersectional inequalities.

Stereotyping persists in parenting, education and the commercial sector especially in toys, books and fashion with pink and blue thinking in the corporate sector dominating.

The report therefore urges the Department of Education to take meaningful steps and make challenging gendered notions a top priority to include the curriculum,  Ofsted, teaching and childcare.

Professor Becky Francis, who co-chaired the commission, said, “What every parent hopes for their child, and what educators hope for children in their class, is that they will be free to achieve their potential, yet what the evidence shows is that we still limit our children based on harmful, tired gender stereotypes….From boys’ underachievement in reading, to the gender pay gap, the evidence is clear that the stereotypes we impart in early childhood cause significant damage to our children.”

The report makes a number of key recommendations and although they are all important, a couple stand out for me. One relates to raising the status of the early years professions by improving pay, training and qualifications of the workforce and the DfE should encourage early years settings to recruit more men.

Another recommendation asks education publishers to sit up and listen and get their houses in order when it comes to producing materials that avoid gender stereotypes.

Read my articles on stereotypes:

Fairy Tales Are Full Of Fluff

Mojo or Nojo? Get a free mojo upgrade by taking yourself outside into the fresh air for a fresh perspective.
White Edge in the mist - why not?!
Middle Earth is a great place to energise!
Smiling is the physical lever we can all pull at any time to bring our minds back into a positive headspace. Jackpot!
Remember, an injured lion can still roar!
Instead of allowing a health issue, trauma, or challenge drag you down, use the experience as a catalyst to push yourself to become stronger, smarter, and better.
%d bloggers like this: