Why should teenagers have a nap in the day?

Sleep is food and fuel for the brain.

According to a report from the Spanish Society of Primary Care Physicians (SEMERGEN) a short sleep after lunch can reduce stress, help cardiovascular functions, and improve alertness and memory.

Siestas can really improve our health.

Take a look the following infographic from the BBC iWonder website: 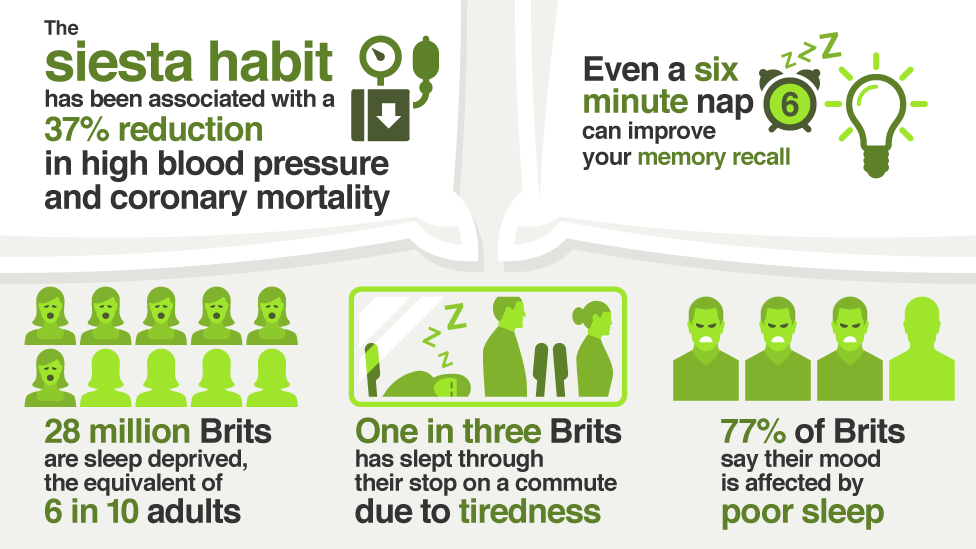 Having a nap might seem like a luxury and would be reckless in some situations but where possible, grabbing some day-time shut-eye is good for you.

It is culturally acceptable in some countries but frowned upon elsewhere.

One recent study suggests that sleep should be on the timetable in schools for secondary school aged children.

Sleepy teenagers with early starts simply don’t get enough sleep and they suffer as a result.

The results are illuminating as those who who napped five to seven days in a week, had sustained attention, better nonverbal reasoning ability and spatial memory.

Ji said that the duration of a nap was all-important and the sweet spot is between 30 minutes to an hour. It was was that a nap longer than an hour interferes with circadian rhythm. Participants who slept between 30 to 60 minutes produced better accuracy in attention tasks as well as faster speed. Ji recommends not to nap after 4 p.m., nor over-nap.

Clearly taking a nap has benefits but another way to approach this is to start school later in the day as early starts are the problem. Sleep education is crucial. Take a look at what the Teensleep Study has to say:

If we want to improve the wellbeing of our teenagers then we need to give them opportunities to sleep. Sleep recharges us.

White Edge in the mist - why not?!
Middle Earth is a great place to energise!
Smiling is the physical lever we can all pull at any time to bring our minds back into a positive headspace. Jackpot!
Remember, an injured lion can still roar!
Instead of allowing a health issue, trauma, or challenge drag you down, use the experience as a catalyst to push yourself to become stronger, smarter, and better.
Notice anything? I nearly freaked out!
%d bloggers like this: