The Khan Academy say this: 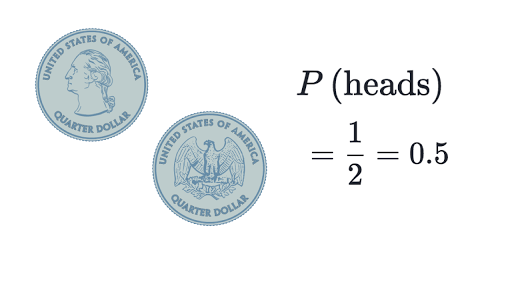 And they are wrong.

They aren’t alone in thinking the theoretical probability that a fair coin lands on heads is 0.5

The probability of getting a heads when flipped is closer to 51/49.

Some argue that it isn’t about probability but physics.

Diaconis (a professor of mathematics and statistics at Stanford University and also once a professional magician) in his paper Dynamical Bias in the Coin Toss, found that a natural bias occurs when coins are flipped, which results in the side that was originally facing up returning to that same position 51 per cent of the time.

But what about a spinning coin?

According to Diaconis, a spinning penny will land tails side up roughly 80 per cent of the time because because the heads side of the penny (on some coins, e.g. with the portrait of Abraham Lincoln on it) is slightly heavier than the tail side and so this causes the coin’s centre of mass to lie more toward the head side than the tail.

The stripes of a tiger are on the outside; the stripes of a person are on the inside.
Living with incurable cancer: an unswerving gutsy approach that leads to taking action against very slim odds and achieving what no one thought possible.
Living with cancer requires titanium tenacity, platinum positivity and gold-plated hope. It certainly isn't easy but taking action against the odds is in my nature.
%d bloggers like this: